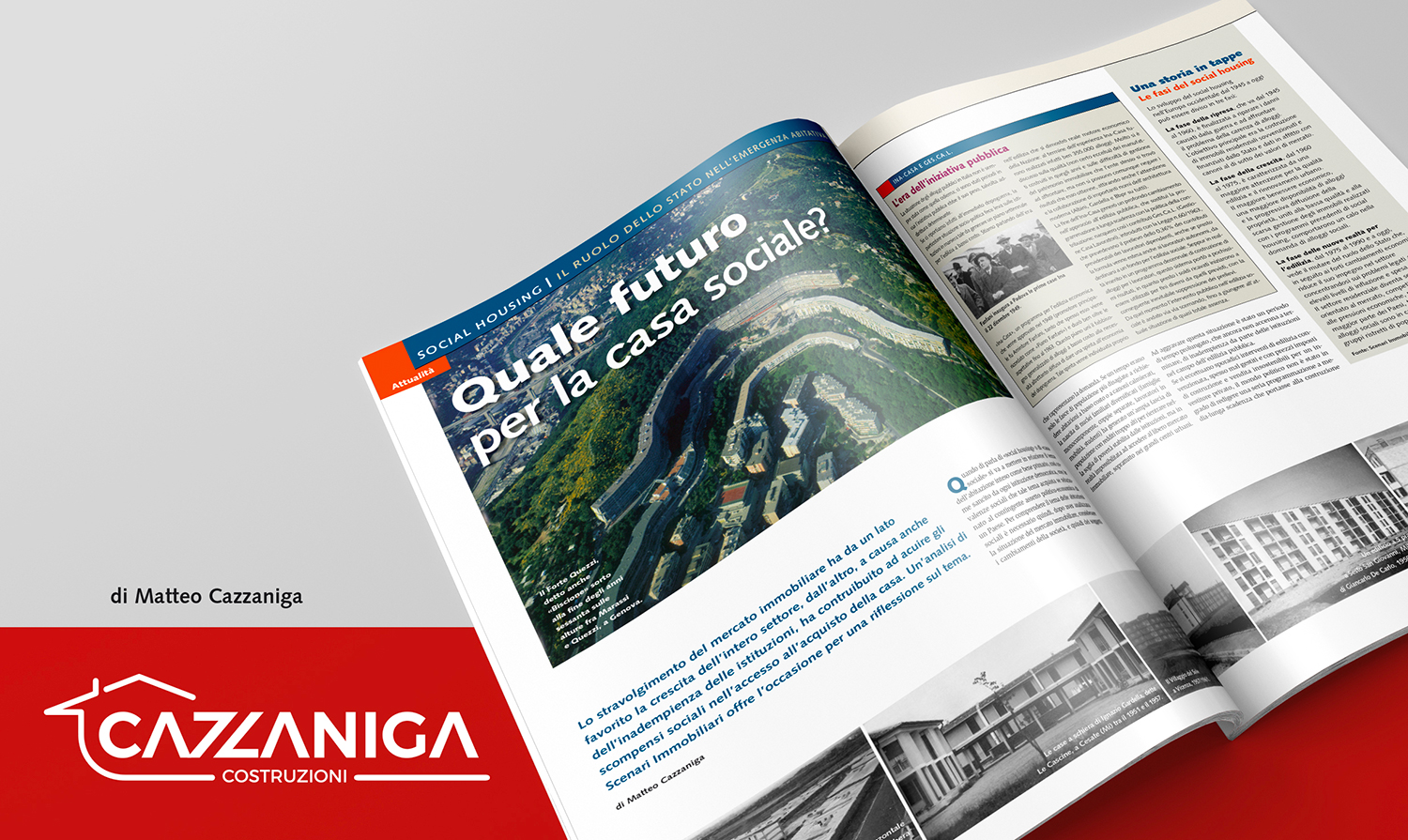 What future for the social home?

favored the growth of the entire sector, on the other hand, also due to the default of the institutions, it has contributed to heightening the social imbalances in access to house purchases. An analysis of Real Estate Scenarios offers an opportunity for reflection on the topic.

When we talk about “social housing” or “social house” we go to relate the theme of housing understood as a primary good, as sanctioned by every democratic institution, with the social values ​​that this theme acquires if related to the contingent political and economic structure of a country.

To understand the issue of social housing, it is therefore necessary, after analyzing the situation on the real estate market, to consider changes in society, and therefore in the subjects that represent demand. If at one time it was only the most disadvantaged sections of the population that required low-cost or low-rent housing, the birth of diversified families (single-component families, separate couples, mobile workers, students) generated a large population with incomes too high to fall within the poverty line established by the institutions, but in reality unable to access the free real estate market, especially in large urban centers.

To aggravate this situation was a prolonged period of time, which still shows no sign of ending, of non-compliance by institutions in the field of public construction.

Except for sporadic contracted construction projects, often poorly managed and with unsustainable construction and sales prices imposed on a private investor, the political world has not been able to draw up a serious medium-long term planning that would lead to construction

of the substantial number of housing that the market demands. With the end of the InaCasa era of the early sixties, discussed and debatable, but certainly capable of concretely producing public buildings albeit of dubious quality and wrecked due to the management problems of such a large real estate, the scenario of public housing it is progressively blocked. And the contributions Ges.Ca.L. (Management of Workers’ Houses) introduced with Law 60 of 1963 and continued until the seventies: soon the

sums collected began to be used for purposes other than the original ones, so much so that they were suppressed in 1974.

Today Italy, as reported by the analysis carried out by Real Estate Scenarios, is, among the great European nations, the country with the lowest percentage of housing in “social rent”. According to the EEC, only 4% of the total stock falls into this typology: just over one million homes which approximately 75% belong to the IACP and the rest are owned by municipalities or other local authorities. According to the legislative decree

subsidized housing, namely financing through direct contributions to low-income families; this sector is managed by municipalities and IACP;

subsidized housing, or support for families with an average income, interested in buying or renting housing with the granting of loans at subsidized rates provided by 179/92; this sector is managed by building cooperatives which, according to law 457/78, can use public resources;

contracted construction, with transfer costs and fees regulated by specific agreements stipulated between the municipality and cooperatives or local construction companies.

In the meantime, the rental market has been liberalized with the introduction of the derogating agreements, of 1992, and the law 431 of 1998, replacing the derogating agreements and the fair rent law, with the aim of promoting access to rental market for middle-income families. For lower-income households, the establishment of a national support fund for access to rental housing, financed by the state, regions and municipalities, was envisaged. A social fund for rent which, however, from the initial endowment of 500 million euros, has gone up to 230 million today. The state’s public intervention is at an all-time low, precisely in a moment of profound transformation of the urban territory to which the real estate market must be able to respond adequately. It is no coincidence therefore if most, if not all of the initiatives underway, arise from strong private interventions, despite all the difficulties that derive from it: it is quite clear that it is very risky for a private investor to embark on housing construction at low cost without concrete public aid, with the already very limited profit margins that exist today.

The entities represented by the so-called “social enterprises” are very interesting. As defined by the Civil Code, these are “private non-profit organizations that carry out … an organized economic activity …

of social utility, aimed at achieving purposes of general interest “.

In the construction field there are now many social enterprises operating in the area and have as their field of action both the construction of individual building products such as hostels, reception houses, student residences (for example the Casa a Colori di Padova) or even the construction entire neighborhoods or residential complexes (such as the Barona Village in Milan).

These are important realities, whose punctual nature, however, means that they are very rooted in the territory in which they develop and cannot be considered a true alternative to generalized plans for public construction: they often run out (precisely because of of their non-profit structure) in punctual interventions that do not bring concrete improvements at a generalized level.

The problem is therefore urgent as well as of clear social importance: it is a question of defining, and in the short term, what the future will be for social housing in Italy and above all, given the current situation, if there is one.

Perspectives for the role of institutions

A strong change of course is needed by the institutions, with a decisive entry by the public operator in the construction of low-cost housing.

Unfortunately, as we know, state finances are very scarce in this area, therefore hoping for direct intervention by the institutions would be almost utopian.

On the other hand, an indirect intervention in which to favor private investors for social interventions, for example through a reduction of urbanization costs, or increases in the volumes achievable in exchange for portions of lots to be allocated to low cost housing.

There could be many solutions, think for example of the new logic introduced by the next Pgt (Territorial Government Plans) in which methods such as urban equalization could help a lot in this sense, allowing

You can find out more about which cookies we are using or switch them off in settings.

This website uses cookies so that we can provide you with the best user experience possible. Cookie information is stored in your browser and performs functions such as recognising you when you return to our website and helping our team to understand which sections of the website you find most interesting and useful.

Strictly Necessary Cookie should be enabled at all times so that we can save your preferences for cookie settings.

If you disable this cookie, we will not be able to save your preferences. This means that every time you visit this website you will need to enable or disable cookies again.